If you want to live in Sendai with Japanese citizenship, consider applying for naturalization

To naturalize and acquire Japanese nationality and live in Sendai, you need to apply for naturalization.

In Sendai, transportation infrastructure, restaurants and shopping malls are concentrated around Sendai Station, making it one of the most convenient in Tohoku.

By Shinkansen, it takes about 90 minutes to Tokyo and from Sendai Station to Sendai Airport in 17 minutes by rapid train.
The rent is relatively low, and the locality that combines the best of the city and the countryside is a popular secret.

If you naturalize, you will have the same name as a Japanese person in terms of family register, passport, suffrage, and social security with your Japanese name.

Expenses for applying for naturalization in Sendai

Here is an estimate of the cost of applying for naturalization in Sendai.
Although our office is located in Shinjuku-ku, Tokyo, we handle naturalization applications at the Sendai Legal Affairs Bureau.

Collecting documents is a difficult task, and you must be able to understand the contents and explain them at the time of consultation.

At first, we considered procedures and consultations on our own, but often gave up on the way.
Our office in Sendai also provides total support for procedures related to naturalization, such as accompanying the Legal Affairs Bureau and preparing documents.

* In addition to these, actual expenses such as transportation expenses, resident's card, tax payment certificate, taxation certificate etc. may be required. Consultation is free.

To live in Sendai, to naturalize7 conditionsthere is.

Examples of documents required when applying for naturalization in Sendai

Foreigners wishing to naturalize in Sendai will need one of the following documents in their home country.

* Required documents vary depending on the applicant's status of residence.

Cases where application for naturalization in Sendai will be rejected

The following individuals are at risk of being rejected for naturalization applications.

* If applicable, please consult in advance.

The administrative scrivener corporation Climb specializes in procedures related to foreigners, including naturalization.
All staff in the office have an administrative scrivener and an immigration immigration agency agent, and provide six professionals in foreign procedures such as naturalization, providing high-quality services and thorough support. You.

The number of foreign residents is increasing in Sendai

The number of foreign residents in Sendai has been increasing over the past decade, reaching over 10 in 2018. 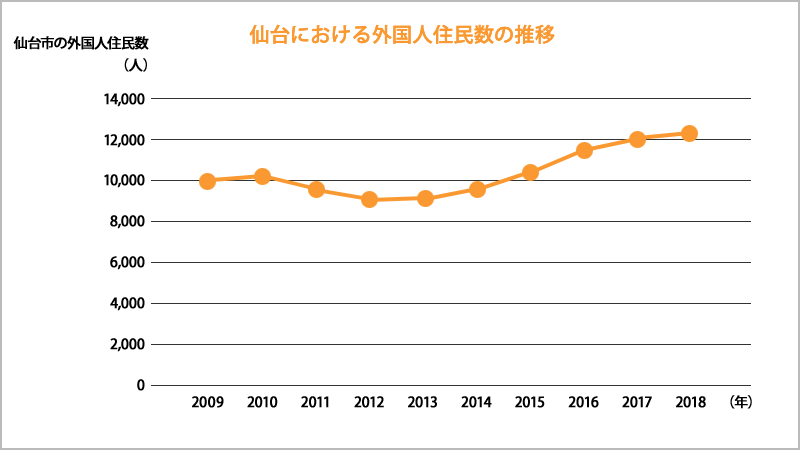 Consultation desk when applying for naturalization in Sendai

If you have any questions or need more information,
please feel free to contact us.

©  To apply for a 2021 visa, go to Climb, an administrative scrivener corporation located in Takadanobaba, Tokyo!